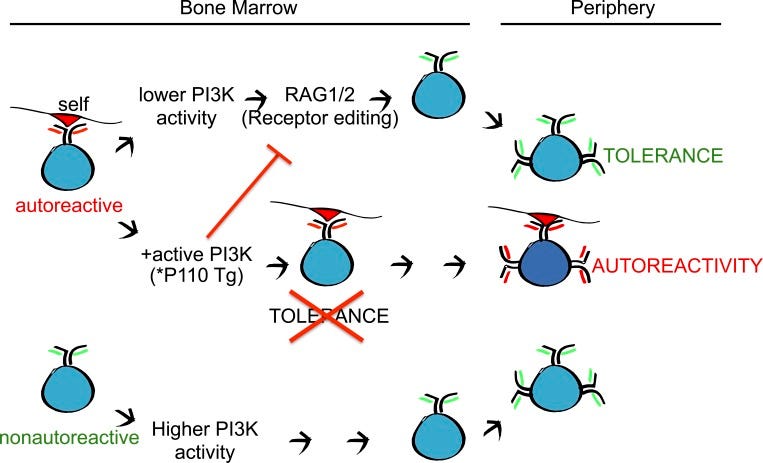 A BIT OF HISTORY

In 2010, scientists at the WUHAN INSTITUTE OF VIROLOGY made the discovery that the Spike Protein of SARS-CoV alone did something quite unusual.

We also demonstrated that another unusual pathway, the calcium-independent PI3K/PKCE/JNK/CREB pathway, functioned  in cooperation with the calcium-dependent pathway to induce COX-2 expression upon stimulation by spike protein.

What is important here is the activation of PI3K. At the time the paper was written, it was not known (or not discussed) that the Spike Protein accumulates in the Bone Marrow. This discovery was made in June of last year.

INTENSE SUSCEPTIBILITY OF HEMATOPOIETIC STEM CELLS TO THE SPIKE PROTEIN

This is the second waypoint towards discovering the mechanism. The June 2021 paper in Nature, An evidence that SARS-Cov-2/COVID-19 spike protein (SP) damages hematopoietic stem/progenitor cells in the mechanism of pyroptosis in Nlrp3 inflammasome-dependent manner, discussed the following findings.

We and others have reported that ACE2 and TLR4 are highly expressed on the most primitive subset of HSPCs, and as demonstrated in this study, these cells are highly susceptible to SP. What is also important and has to be addressed is if in the case of non-productive infection the virus can survive in a latent form after entry in the long-living HSCs. If this occurs, bone marrow and hematopoietic organs could be a reservoir of this virus.

Now we come to the point of discovery. If PI3K is allowed to activate in a B Cell, and that B Cell is autoreactive, even strongly so, it will not be destroyed or left to die. It will receive its Tonic Signal and survive, to be let loose into the periphery where it is certain to encounter antigen (as it is autoreactive) and become an extremely dangerous and destructive Plasma Cell.

Here, we show that B cell–intrinsic expression of a constitutively active form of PI3K-P110α by high-avidity autoreactive B cells of mice completely abrogates central B cell tolerance and further promotes these cells to escape from the bone marrow, differentiate in peripheral tissue, and undergo activation in response to self-antigen.

The study showed that the Plasma Cells in mice were able to secrete high-avidity autoantibodies in vitro, but not in vivo. Yet, in some strains of transgenic mice, they were able to. I cannot find any studies showing whether the same holds true in humans. Also, could the Spike Protein also interact with Helper T Cells in a way that does allow (if we follow the mouse trail) the B Cells to become active Plasma Cells?