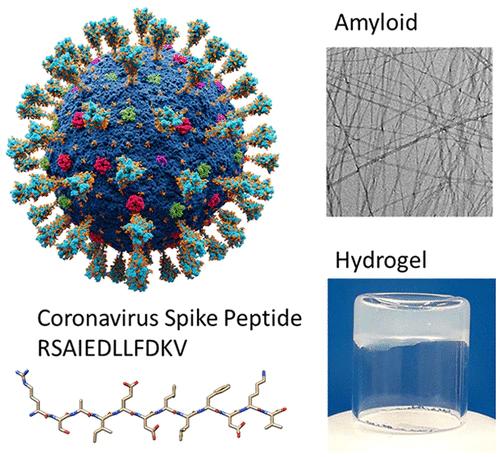 IT IS NOT A QUESTION OF AMYLOID OR PRION, IT IS DEPENDENT ON THE RATE OF PROTEIN AUTOCATALYSIS AND THE HOST’S ABILITY TO CONTAIN IT - The Spike Protein As Novel “Prioloid”

DARWINISM AS MASS MEDICAL EXPERIMENT: MEIN FUHRER, I CAN WALK

Manfred Eigen, the 1967 Nobel Laureate in Chemistry, recorded a very prescient interview in 1997. Let us review a few extracts from this discussion.

1)      Many people try to invoke nucleic acids because they can't think that anything could amplify autocatalytically without RNA, that simply isn't true. We know proteins which can amplify themselves autocatalytically, there's new work showing that this is possible. But the difference to nucleic acid is now inherent autocatalysis, in other words a very specific protein can be made so that it makes an important bond of itself and therefore can favour its own production.

1)      The protein imposes its form on the other. Also in the Monod model there was this 'all-or-none' transition from one conformation into another conformation. Apparently, that can be triggered. Now you refer to my theoretical paper on prions. I could show that one single subunit cannot do it. At least, what would come out if you would make a autocatalytic mechanism, using only one subunit, would mean that either we all get sick or none of us gets sick. What does it mean, get sick? If you get an infection it's important what is faster. The decomposition of what you get into the body, or the autocatalytic turnover of the other protein? Either one is faster or the other is faster. So, even if you get big infection, if the metabolic decomposition is faster than that it wouldn't harm you or, in the other case, if the autocatalytic conversion's faster everyone would get it.

So, how does this apply to the Spike Protein of SARS-CoV-2? We can learn from Alzheimer’s.

Alzheimer's disease is the commonest form of senile dementia, affecting almost 20 million people worldwide. This neurodegenerative disorder is characterized by amyloid deposition in senile plaques, composed primarily of fibrils of an aggregated peptide, beta-amyloid. Fibrillation of beta-amyloid is a nucleation-dependent polymerization process, which is controlled by two kinetics parameters: the nucleation rate and the elongation or growth rate. As the kinetics of fibrillation is strongly dependent on the presence of trace amounts of fibrils, we suggest that the aggregation of beta-amyloid is a model of autocatalytic reaction.

The SAME also applies to PRIONS.

Prions are thought to replicate in an autocatalytic process that converts cellular prion protein (PrPC) to the disease-associated misfolded PrP isoform (PrPSc). Our study scrutinizes this hypothesis by in vitro protein misfolding cyclic amplification (PMCA). In serial transmission PMCA experiments, PrPSc was inoculated into healthy hamster brain homogenate containing PrPC. Misfolded PrP was amplified by rounds of sonication and incubation and reinoculated into fresh brain homogenate every 10 PMCA rounds. The amplification depended on PrPC substrate and could be inhibited by recombinant hamster PrP. In serial dilution experiments, newly formed misfolded and proteinase K-resistant PrP (PrPres) catalyzed the structural conversion of PrPC as efficiently as PrPSc from brain of scrapie (263K)-infected hamsters, yielding an ≈300-fold total amplification of PrPres after 100 rounds, which confirms an autocatalytic PrP-misfolding cascade as postulated by the prion hypothesis.

Back to the Spike Protein. Let us read one more extract from the Eigen interview:

1)      And the important point is this protein, this sequence... that means this gene, is your own gene, but one thinks that the conformation, the structure of the infectious protein is different from the host form... from the uninfectious host form. So what does it mean, different? Well the host form has lots of alpha helices, the spiral kind of structure, whereas the infectious form, the prion form as one calls it, has much more beta structures, they are strands leaning side by side, and therefore will behave differently in the cell.

THIS IS PRECISELY WHAT WAS FOUND BY VALERIA CASTELLETTO AND IAN W HAMLEY IN THEIR JANUARY 4, 2022 PAPER: Amyloid and Hydrogel Formation of a Peptide Sequence from a Coronavirus Spike Protein

We demonstrate that a conserved coronavirus spike protein peptide forms amyloid structures, differing from the native helical conformation and not predicted by amyloid aggregation algorithms.

The reason this has been so confusing is that the Spike Protein behaves as BOTH A PRION AND AN AMYLOID!

The “doses” are being repeatedly given. Over and over. Infection. Transfection. Who among us can halt the “autocatalytic turnover of the other protein?”

This is, I certainly believe, what we are witnessing before our very eyes.

Do we solve this? Can we find therapeutics to halt the autocatalytic march of this novel “Prioloid?” Or, are we facing a Strangelovian fate wherein the inevitable comes to pass as the efforts of the Pentagon brass and all the politicians in Moscow and Washington cannot undo the cascading series of cataclysmic events.